I’m Bran, your elected Education Officer for this academic year. I’m originally from the USA, but I’ve been living in the UK since 2012. I first came to Manchester Met in 2016 to do a Foundation year in Art, before progressing onto Photography. Being a Course Rep for all four of these years greatly influenced my decision to go for the Education Officer role.

I started getting more involved in The Union during my first year — I was a part of Rock Society, Gamers, and Nerds and made so many friends along the way. In my second year, I helped to restart the LGBT+ Society and I was Treasurer of Rock Society.

In my final year, I was Society Council’s Campaigns and Liberation Rep, as well as Vice Chair of both Rock Society and LGBT+ Society. I was also a member of ArtSoc, and got the chance to organise an exhibition in collaboration with the LGBT+ Society. I definitely think I wouldn’t be in this role today if it wasn’t for all of the positive experiences I had because of The Union.

I’m non-binary and use they/them pronouns. In my free time you can find me playing video games and drinking copious amounts of coffee. I currently live in Salford with my partner and my plants.

MORE ABOUT MY ROLE

I work on all things that affect students’ Education at Manchester Met, such as influencing policy on assessments, deadlines, examinations, submissions, teaching, learning, timetables, representation and exceptional factors. I believe that the University should support all students to achieve their ambitions, and I use students comments and course reps’ voice to make changes students want to see!

Check back soon to see what projects I'll be working on this year. 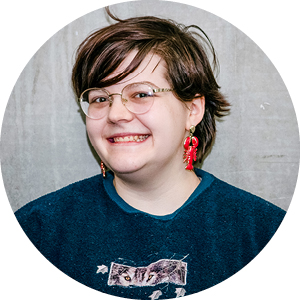