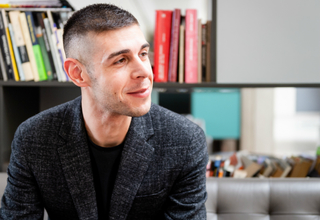 Oli Delgaram-Nejad is a postgrad student at Manchester Met, studying for a research degree in Linguistics with Psychology, with previous degrees in English with Creative Writing and Professional Writing. Here, he shares his insight into what it’s like coming to uni after a break and embarking on a new journey…

"My university journey began in 2011, at Falmouth, with a stylistics combined honours. After graduating, I took up a clinical post in the NHS and enrolled onto a part-time master's in professional writing, alongside. Eventually, I grew hungry for a research career, and (given the potentials for conflicts of interest) I relinquished that post and submitted PhD applications to two universities; following a few days in Manchester, exploring MMU's facilities and meeting current students, it became difficult to sustain enthusiasm for the other institution.

The change from full time undergraduate to part-time postgraduate study is a novel transition. Different strategies, that take time to figure out, are required altogether: those that involve typing faster—in the Leo Buscaglia sense. Postgraduate study sees one's transition from guided to independent study, and the shaded spots which formerly offered shelter are steeped in light, suddenly. It takes time to process a change of that kind; the result is swift academic maturation—not a bad thing, but a shock nonetheless.

Realising that you are taking on a new level of responsibility can, initially, seem intimidating, but it soon proves empowering. These skills have also transferred well to other domains (e.g. self-employment as an independent consultant). Nervousness and doubt are stable features of ambitious work, take them as a sign that you are invested and motivated to perform; feelings of this sort are natural, and you should give yourself permission to harbour them. Also, rest assured that the quality of teaching and supervision at MMU is of a formidable standard —you're in good hands.

I would also say to post grad students to get involved with The Union and use them for support or advice when needed. Around six months into the first year of the PhD, I contacted The Union to discuss organising an event on mental health. The response was very positive and I just assumed that it would be the best place to go. They introduced me to other students with allied aims, and we're working on something at the time of writing. Great work is being done: be a part of it.